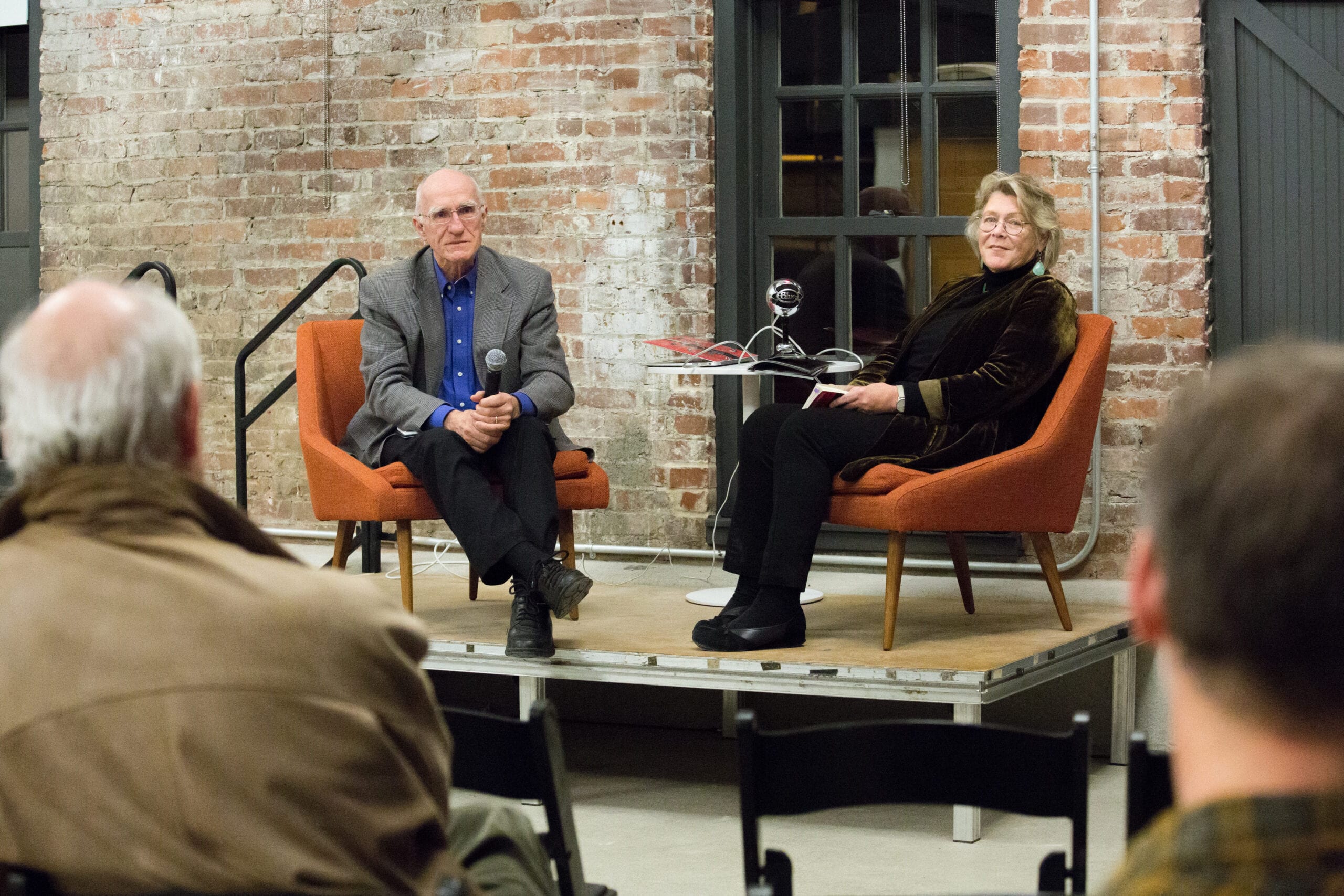 As part of The Mill’s launch in November 2018, a full week of events were held showcasing the programming, and the promise of The Mill as a center for innovation of all kinds. In keeping with that mission, The Mill selected a Bloomington literary giant, Scott Russell Sanders, whose book, Staying Put, was selected as The Mill’s inaugural book club selection. Scott Russell Sanders was interviewed by Jane Martin, Board Chair of The Mill and retired venture capitalist. What follows is Part 2 of a transcript of this conversation, which has been edited for clarity and brevity. You can read Part 1 here.

Jane Martin: Just to keep things interactive. I have a few more questions for Scott, but I’m wondering if there are any of you in the audience who are dying to ask a question. You are, can you yell? Can you yell your question Benedict?

Benedict Jones (DMI Photographer): You [Scott] talk about your love for books and how, how special they are for containing information. How did you overcome the hurdle of containing all of this information when you’re writing? What got you started?

Scott Russell Sanders: I started reading very young, but the public library was my family’s best friend. We didn’t own any books, just a dictionary, a bible and sometimes those Reader’s Digest condensed books that my mother would find at garage sales. But otherwise we didn’t have books at my house.

At the library I’d pick up books from the children’s section that were well-worn and had incredible amounts of wear and tear. I thought at the time that all of the authors of books were dead, that they were like dinosaur tracks [mild laughter]. One day, I came upon a book, that smelled fresh and new. I asked the librarian, “This is a new book. Where did it come from?” And she told me that it came from a publisher, and that’s when I learned that books were still being made. I was convinced that the books in the library were all the books that existed. It sounds corny to say. But I think at that moment the possibility that there were more books became clear to me.

These stacks of books that I carried home every week, there were picture books, something that gave me so much joy and carried me so many places and countries. These books put me inside the minds of animals and send me to outer space I thought it would be marvelous if some day I could make a book that would give somebody the pleasure of doing that. Of course, I didn’t articulate that as a six year old, but I think that’s actually where the seed started. I’d always loved reading until I was a senior in college. I was determined that I would be a scientist, specifically an astrophysicist. That’s what I was passionate about and that’s what I studied. I got a university scholarship to study physics, but I kept reading. I read for pleasure, and when I was in college, I took classes in English just so I could read and not do math and physics all the time.

I thought it was so cool. You get the same amount of course, credits for reading as you could for church service. It seemed like too good of a deal to pass up. So I switched majors. I left science, because I was also disturbed by the way waste science has been used for military purposes, and I left and switched to English and got a PhD. And when I came here to teach and I spent 40 years teaching English, but also to make something that might give other people the same kind of pleasure, excitement, and even illumination that books gave to me. But in the meantime, I also wrote books, worked on books for 10 years before I was able to start publishing. So, I kept at it, and that’s a pretty common story. I ended up writing 4 books of fiction before any of them were even accepted by a publisher by the time I began to get noticed.

Jane Martin: I realized that you wrote this book in 1993, so that’s 25 years ago, but I’m not sure I’m going to construe this vein that goes through this correctly, but there seems to be a little bit of darkness in here. So there’s a kind of dark side. That you talk about the “midnight shimmering with dread. “I cannot separate the bright thread of fear from the story I have to tell,” which is about making one self at home on the earth. You write that “the only sure antidote to oblivion is creation and I believe in only one power, one shaping urge that infuses everything.” So what are you saying about these midnight fears and what are you saying about this creative power of the universe?

Scott Russell Sanders: I was raised in the Methodist church. Their very gentle but dogmatic and considerate tradition I think has been quoted as saying that my religion is kindness. And I would think that would be true what I took away from that Methodist upbringing, but part of it was as a child I was taught there was an afterlife. And over the course of going to college and Graduate School, I let go of that belief. I’m still trying to live by a lot of the values that I learned not only in the church, but the idea that there is some world other than this, I had to let go of that idea. And so for a long time that was a painful loss. And I’m not trying to impose my skepticism about heaven or an afterlife skepticism. It’s confidence, but I’m not trying to impose that on anyone. I’m just describing with what I went through and I think at the time I wrote Staying Put it was published 25 years ago. It was written between 30 and 25 years ago, so the earliest parts of it were probably written 30 years ago. I have long since come to terms with that fear. Just accepting that that’s the condition we’re born to. As I’m reaching 73, as I get closer to the day I will certainly die, this fear troubles me less and I feel more connected to and more thankful for the ongoingness of life.

It’s not that fancy of an idea at all. There will be a spring. The creatures that survive human assault on the planet will be here long after I’m gone. I know that humans will still be around after I’m gone. And I think that gives me a kind of peace. I gain comfort from that, to think about how the ongoingness of life will go on after me, and that doesn’t even cover life in the rest of the universe.

Our lives are so brief, in a firefly’s flicker, that I think that fear keeps us from living. Pascal once said that the silences of spaces fill men with dread, and his universe was much smaller than ours is today. And we’ve found out it’s quite full of things. There are billions of galaxies and stars and our universe is much vaster than we could have ever imagined.

The darkness that is in my current writing in recent years, to a certain extent, it’s insane. That darkness is there is not a fear of personal extinction, but of grief and the suffering that we caused war, another war to violence, to racism through all the ways in which people cause each other pain every day.

Jane Martin: Well, there’s another main in your book. I just found it terrific to be able to connect sex and sexual attraction with nature in a way I hadn’t really thought about before. Here’s your sentence. “Sex between two people is not just two people attracted to one another, but a greater attraction that binds us to the earth, because I find the earth voluptuous.”

Scott Russell Sanders: I especially find this to be true in the Midwest, the hill country, the richness of what you see in the Midwest, the curvatures, the fecundity connected to the human impulse to be fruitful and multiply. And that impulse also extends to all living things.

Jane Martin: One of the things we talked about in the preamble to our talk was weather the midwestern landscapes, a sort of created a kind of contemplative writer. I mentioned Carl Sandberg and Thomas Merton. And then you mentioned John Muir, who, you know, the Californians have hygiene, but he grew up in Wisconsin. Is there something, about midwestern landscapes that inspires writers?

Scott Russell Sanders: The midwestern landscape is a subtle one, so the people who find it dull haven’t looked hard enough. In Ohio there are four days in the fall where the corn turns a coppery color and sunlight catches the stalks and they look beautiful. Just for a moment. If you missed it, or weren’t looking for it, you wouldn’t notice it.

After I gave a reading where I described that passage in one of my books, Writing From the Center, one of the students from the university came up to me and waited until everybody else left, and asked me, ” Mr. Sanders, do you really think corn can be beautiful?” And I said “Yes, it can be, if you find something beautiful,” and she said, “That’s good to hear, I was worried that I was wrong.”

Now I couldn’t find 5,000-acre farm fields out here. We live in hill country, and we don’t live where there are big waterfalls, or crashing surf. Where we live is of a more solid state that requires more patience to see it, more attentiveness. So I think writers from other places in America might have to slow down and pay attention, whereas writers from the Midwest know that they have to seek out the natural beauty or find beauty where you least expect it. My impression and my impression is that writers who feel at home in the Midwest also take themselves less seriously as masters of the universe. Not taking oneself so seriously, being curious about the world around them, I know this is a stereotype, but like a lot of stereotypes it has a bit of truth to it.

Jane Martin: I want to connect what we’re trying to do here at The Mill. So creating a whole individual that might be an engineering fellow who operates under their left brain, very linear thinking and trying to create a space here of innovation and diversity and cross-pollination. Would you like to speak to that?

Scott Russell Sanders: All good work requires imagination. No good work results simply from turning the crank. I can code, I can do math and so forth, but to actually make something that’s going to matter to you requires creativity.
This building was built for a very utilitarian purpose. But to build this building required all sorts of artisans. And to totally repurpose this building into the structure it is today required all sorts of people, from architects and engineers to bricklayers. Some of them are still working inside to make sure that everything is finished. All of this work requires imagination.

I hope that in the conference rooms and in the various places where people can get and talk that they’re not just talking about nuts and bolts. Of course, those things are important, but they’re also hopefully talking about what’s worth doing. What do people need? What does the world need? Bloomington has something hundreds of nonprofit organizations. Every single one of them was started because one of the more people said, here’s a need, how do we meet this need?