“Policies and procedures are often written in black and white, but humans make them grey.” So says Mill member Sharr Pechac’s website for her business, GreyPrint Consulting, LLC. That grey space is her sweet spot. 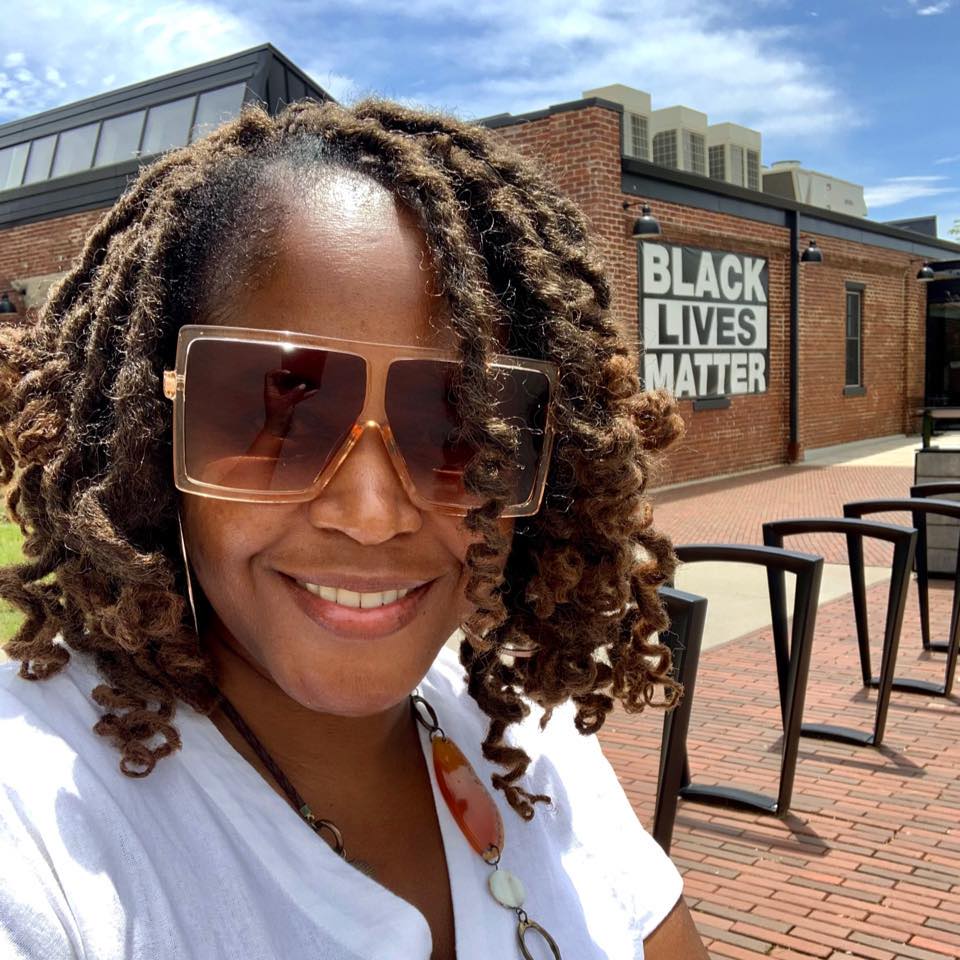 If you’ve seen Sharr working quietly at The Mill, you might not guess that she was the powerhouse behind strategic partnerships and solutions for major nonprofits and universities. She jokes that even her husband isn’t quite sure what she does all day.

“You tell somebody that you do ‘consulting,’ and they don’t really understand the depth and the breadth of what you do.”

An Ohio native, Sharr built a career in human resources and student services and started her PhD in higher education there. When her husband got a job with the IU football program, she had to pivot, finish her dissertation, and keep building her career—from Bloomington. She needed something that would allow her to continue to work in what she considers her purpose: helping others be successful through education and employment opportunities. But at the same time, she needed flexibility with family in Indiana and Ohio.

Sharr’s passion for her purpose comes from firsthand experience of the rocky road of higher education and how it can lead to transformational life changes. “When I think about my own journey through college—” she stops and laughs. “I hope no one ever goes back and looks at my ACT scores or my grade point average. Just don’t do it, never do it! You would be in shock to know that I graduated from high school and then went on to graduate from college three times.”

“I am a prime example of what a greyprint means. Having to think about a creative way to be with my family and have flexibility and work in my passion, and living through this philosophy of, ‘Success is a grey-print and not a blueprint’—that’s how I got to GreyPrint Consulting, working in education and employment strategies and solutions.”

At first glance, the scope of GreyPrint’s work appears broad. It currently spans implementing a regional scholarship for minorities and women to diversify the digital tech field, to designing a national community engagement strategy for STEM PhD students, to creating a student-focused mental and behavioral health coaching program.

Even though these projects may seem different, Sharr says many of them boil down to the importance of strategic partnerships and what it takes to accomplish them.

“A lot of people don’t understand what it takes to come up with an idea for a strategic partnership and then figure out, what are the exact next steps to accomplish this idea? Who are the stakeholders that need to be at the table? How much money will it take to accomplish this idea? And oftentimes they don’t have the capacity or the expertise internally. If it’s a strategic partnership that involves an educator and an employer, they need somebody who could sit right in the middle, right in that grey space.”

And that’s where they’ll find Sharr. She helps them move past talking about an idea to making a strategic partnership produce measurable results, not just meeting minutes.

“The strategic partnership is strategy planning. It is communication. It could be marketing. It’s stakeholder engagement, it’s project management, it’s evaluation.”

Behind all that strategic work, behind the meetings, the research, and the spreadsheets, what ultimately motivates Sharr is compassion and commitment to making a difference in human lives.

“When I worked in HR, there were all of these policies about how people can apply for jobs, or get promoted, or take sick leave. And I often found myself having to look at this black-and-white policy and administer it, knowing that this was a unique individual sitting in front of me with unique circumstances.” 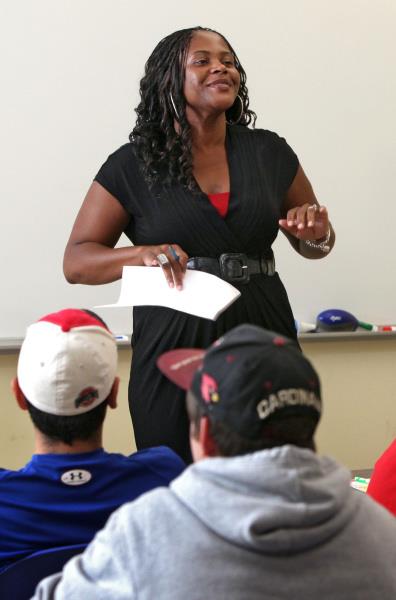 Everything was in black and white, but I would have these students sitting across from me, saying, ‘But I am a unique person, and I have unique circumstances. This black-and-white policy does not fit for me. So what does that mean for me?’”

“You can have four of five things that it takes to be successful, and that one that you’re missing is the one barrier to your success.”

“Unfortunately, oftentimes you will not be successful if we only go by this black and white policy. But if we can figure out another way for you to navigate through this, you still can be successful. We just have to design the success in a way that works for you.”

“And so that’s why you have employers and educators now saying, ‘Wait a minute.’ Educators are saying, ‘I’m not getting students through my programs, through my institution.’ Employers are saying, ‘I am not able to source the talent that I need.’ You can’t look at it in this black and white way, and you can’t do it alone. You have to have strategic partnerships in order to accommodate these unique individuals that are looking for opportunities, and you want to give them opportunities to be successful. We have to work together.”

While Sharr’s clients appreciate the convenience of working with her as their single point of contact, they also reap the benefits of her network of subject matter experts, editors, and statisticians. An essential member of the GreyPrint team is Allison Mecum, Research Collaborator and Contributing Writer.

“There’s no way that I could do this work by myself. I couldn’t expect others to accomplish their goals through strategic partnerships and then work in a silo by myself. I tap into a network of experts that help me with every single project I work on, even if I have to hire additional subcontractors to just help me brainstorm.”

The Power of a Mentor

Building relationships and networks might be Sharr’s most important skill. And like other successful entrepreneurs at The Mill, she’s found that having a mentor is critical to her success.

Sharr first noticed her mentor because she was doing exactly the kind of work Sharr wanted to do: working as a consulting for higher ed and nonprofit foundations. So she asked: how did you make this career happen?

As it turned out, Patricia Steele, Sharr’s mentor, had written a book to answer that question, called Create the Work You Want.

“She told me to read over her book, and if I had any questions, to follow up with her. We started to develop a professional relationship over time. And I told her, ‘Patricia, I really do feel like I could start my own business.’ Her book gives you six steps to start working for yourself. She said, ‘Don’t worry about all six steps right now.  I’ll give you three things to do first. If you do these three things, you can get started on your own consulting business.’”

“She said, ‘Type up about three things that you feel like you would like to do, three services. And once you type up those services, put them on a website. It doesn’t have to be anything fancy.’ And so I did that. They have evolved over time, but they’re still there.”

“And then she said, ‘Start reaching out to your network. Anybody that you used to work with in the past, if they were a coworker, if you met them at a conference, reach out to all of them, tell them what you’re interested in, tell them that you’re consulting. Tell them these are the services that you offer, and send them a link to your website. Start with your network.’”

“And that’s exactly what I did. I started with my network. I reached out to a couple of people, and JobsOhio was my very first contract. And the way that I got that contract is because I had previously worked with the project director at Columbus State Community College. So Patricia was exactly right.”

The majority of Sharr’s projects are from referrals, which she gains using the strategies her mentor taught her. Since starting her business in 2019, she’s had a nonstop pipeline of work. Sharr follows Patricia’s advice closely.

“When you are working as a consultant, you have to make sure that you reserve a good amount of your time for outreach and relationship building: the relationships that you build today are your projects in six months.”

Needless to say, Sharr recommends Patricia’s book to anyone who tells her they want to be a consultant. Entrepreneurs looking to find a mentor should note that Sharr didn’t ask a random person to mentor her: she asked the person with whom she had already established a relationship, and whose advice she already valued and implemented.

“We had known each other for a while before I officially asked her if she would be willing to mentor me. And obviously she said yes. One of the best things that I have ever done is just to get up the nerve to ask her to be my mentor. But I am glad that I was able to do it by first building some type of relationship with her.”

Sharr is interested in more mentors—she thinks we all need a community of support to be successful—but for now she focuses on building relationships. She’s frank that networking does not come to her naturally.

“As a person who is reserved and extremely introverted, to reach out to somebody and introduce myself, that is very challenging to me. But what pushes me to do it anyway, even though I have this fear, is there’s a bigger purpose to my work.”

“I believe that my purpose is to help other people be successful through education and employment opportunities. And so I can’t be quiet. I have to meet people, I have to network, because the more projects that I work on, the more opportunities I can help develop for other people.”

“I have to tell myself, ‘You’re shy, you’re introverted, you don’t want to do this—do it anyway. Get out of your own way, because if you open your mouth or if you send this email and you connect with somebody, that could give you a project. There are hundreds of students that you could help get a degree, hundreds of people that you can help get an employment opportunity.”

Her mentor helps Sharr bridge the gap between her passion for her purpose and the necessary financial outcomes of her business.

“My mentor understands that the work that I’m doing is my passion, and she reminds me that I have to put a price with this passion. She’s like, ‘That sounds great. What are you charging for this? What is your consulting fee?’”

Her mentor also pushes Sharr to set a goal, then checks in to see how she’s progressing toward that goal. Sharr’s current goal for GreyPrint is to sustain her successful business, but more importantly, to focus it on the kind of work that gives her energy and fuels her excitement.

“There’s a ton of work out there, which is why you should always be willing to mentor somebody and give them some insight. There is enough opportunity to go around. But instead of having 10 projects, I’d like to pick up a couple very meaningful projects that are very aligned with my skillset and my passion.”