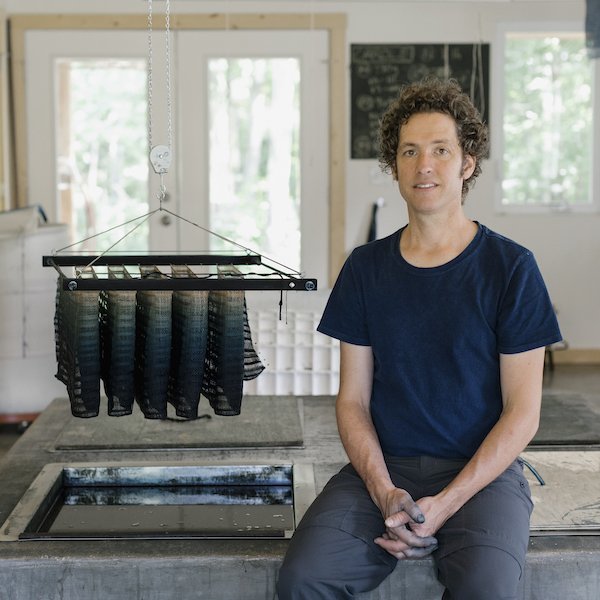 Watching Rowland Ricketts dye a piece of cloth in indigo is like witnessing alchemy. The cloth dips into the murky depths of an indigo vat—the vat puts off a deep, earthy, funky odor—and then emerges a slimy algal green. It looks nothing like indigo—until it’s dipped in clean water. And then, like magic, the cloth reveals an astonishing blue, as clear as a summer sky.

“I invest so much time and energy in making something that is so intangible,” Rowland says. “It’s a color. It’s wavelength and light.” 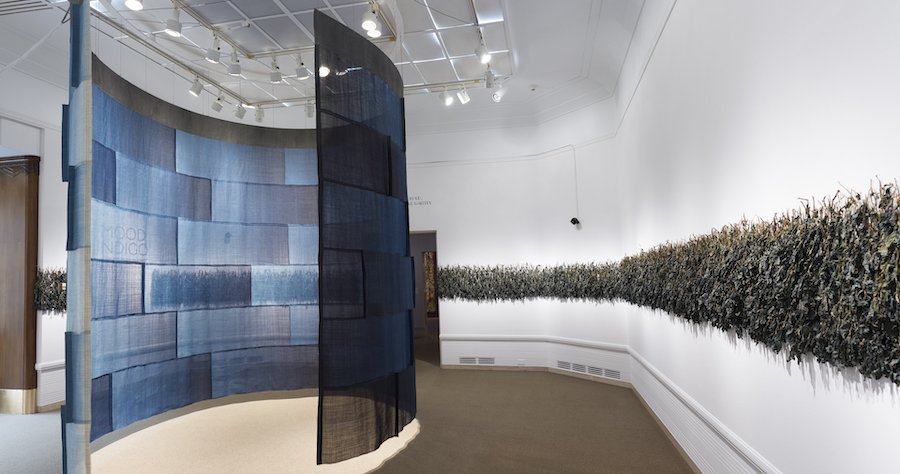 Indigo traces connections across time and many countries and cultures. But as a teenager in suburban St. Louis, Rowland says, “Plants were things that you drove by on the highway. The plant we were most familiar with was the grass growing on our lawn.” Today, Rowland and his wife Chinami grow 750 row feet of indigo at home, and another 1,000 row feet at IU’s Campus Farm on the Hinkle-Garton Farmstead. They harvest and process the indigo, and use it to dye Rowland’s art installations and fine craft pieces, and Chinami’s handwoven textiles. 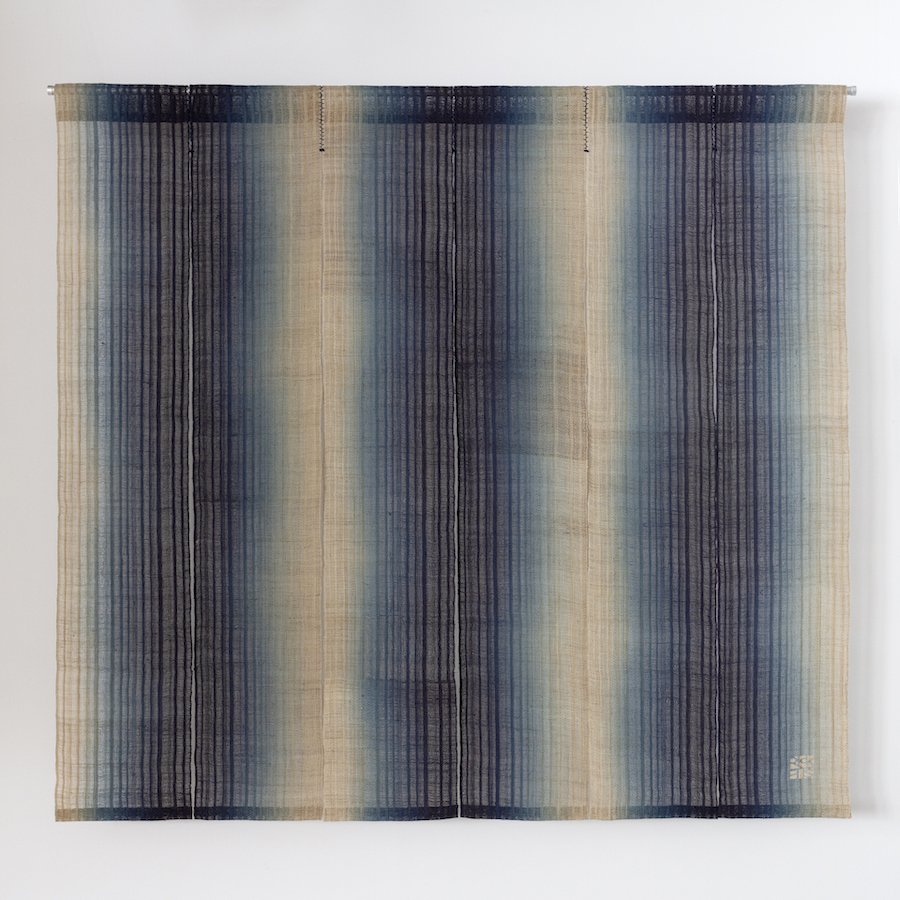 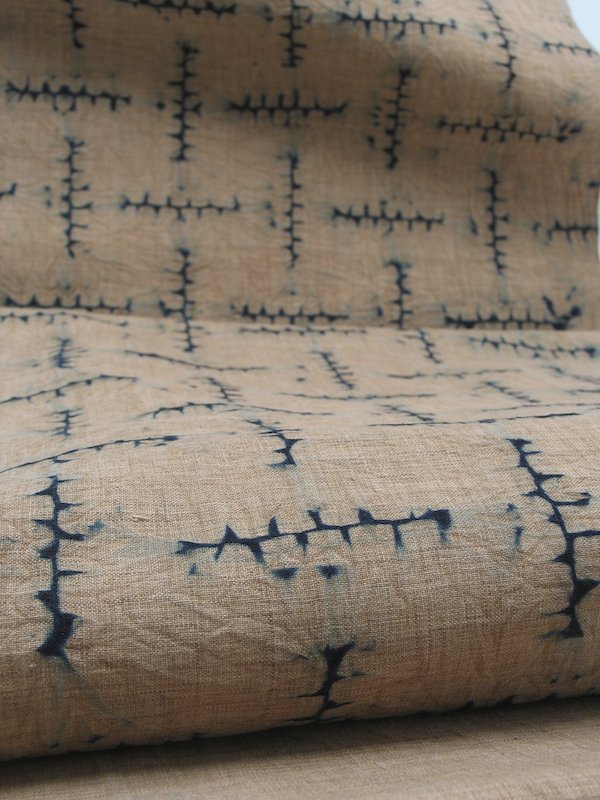 In 2014, Ricketts Indigo won the Martha Stewart American-Made Award for crafts. The award honors “makers, craftspeople, small-business owners, and innovators from across the country . . . for their dedication to creative entrepreneurship and to building successful businesses and communities.” Rowland currently serves as the Associate Dean of the Eskenazi School of Art, Architecture + Design at Indiana University.

Rowland’s interest in indigo started after college, when he moved to Japan, but he didn’t go there with indigo in mind. While teaching English in a rural community, he spent his free time doing black-and-white photography (in the days before digital). He set up a darkroom at the high school and established a photography club for students. Then he found an old farmhouse to rent, moved in—and soon discovered that all of its grey water went into the stream next to it. It wasn’t too hard to discover: the drain was literally a hole that emptied outside.

“So I started asking around, and I learned it was true for all grey water—including all the chemicals we were putting down the drain in the darkroom at school. It quickly opened my eyes to the direct impact of how we make things has on our environment.”

“This great distance that we’ve put between how the things we consume are made and ourselves—it’s a global distance, a willful blindness. I was trying to make beautiful images while I was dumping chemicals into the stream.”

Having given up photography, Rowland got to know a group of natural dye growers who lived on a mountain of terraced rice fields. All of their water was drawn from a spring higher up, and all their grey water went out to their rice fields.

“They were extremely conscientious about the plants and the mordants they were using to fix their dyes because it would end up in the soil and in their food. I wanted to be making things in a way that was much more in tune with the environment, and they were already doing that. Working with people who had traditional and historical knowledge opened my eyes to a different way of knowing. It felt like something that was missing from my own background. II think it existed here at one point in traditional communities, but certainly not in mine.”

Rowland met his wife Chinami when they apprenticed with the same dyer. While Rowland stayed focused on dying, Chinami turned to kasuri weaving. She uses a complex double-ikat technique that she executes with very fine single-strand yarns on a traditional narrow-width loom. The meticulous work demands patience as well as technical mastery. Her cloth is coveted for kimono and obi in Japan, where its extraordinary quality is understood and appreciated, and sold in the US to collectors and high-end interior designers. 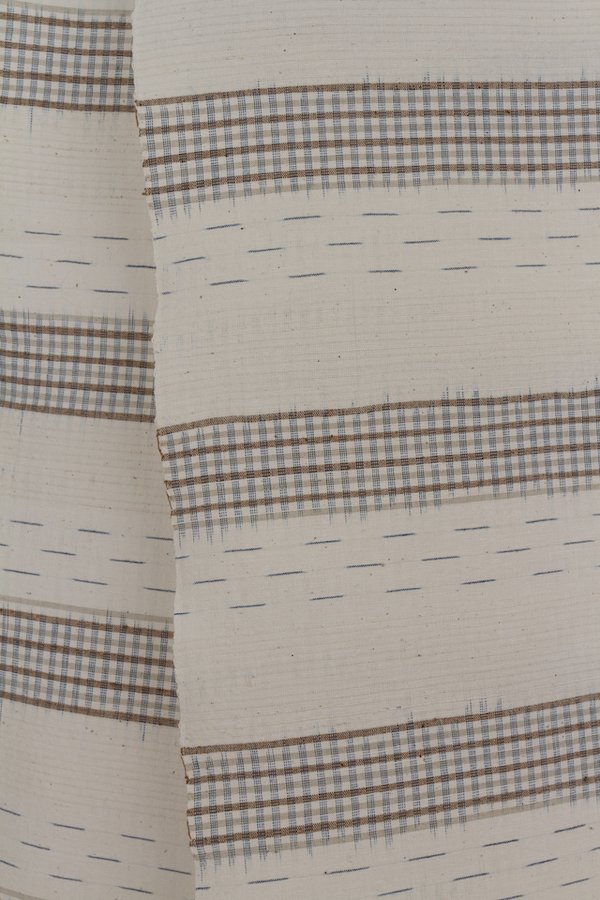 The Ricketts came to Bloomington when Rowland was offered a visiting professorship at Indiana University. He jokes that when he interviewed with IU over the phone, the Ricketts didn’t know where Bloomington was and had never been there— but they were living above someone’s garage in one-bedroom apartment with a dog and a kid, so of course he said yes. “It turned out that IU and Bloomington were a really good fit,” Rowland says. “I feel really lucky.”

In their early years in Bloomington, the Ricketts grew indigo at Muddy Fork Farm, and community members would often help harvest it. Today, they grow their own, and IU itself has a dye garden called Color Field, funded through the Ostrom Grants, where Rowland’s students learn about natural dyes, including indigo.

“It’s really fitting, because Elinor Ostrom’s work was about the commons, about communities managing shared resources. The growing cycle doesn’t map onto the academic cycle. So all the students engage with the dye garden, but in different ways. The students who might be planting plants aren’t the ones who harvest them. Those who harvest it aren’t the ones who use it.” 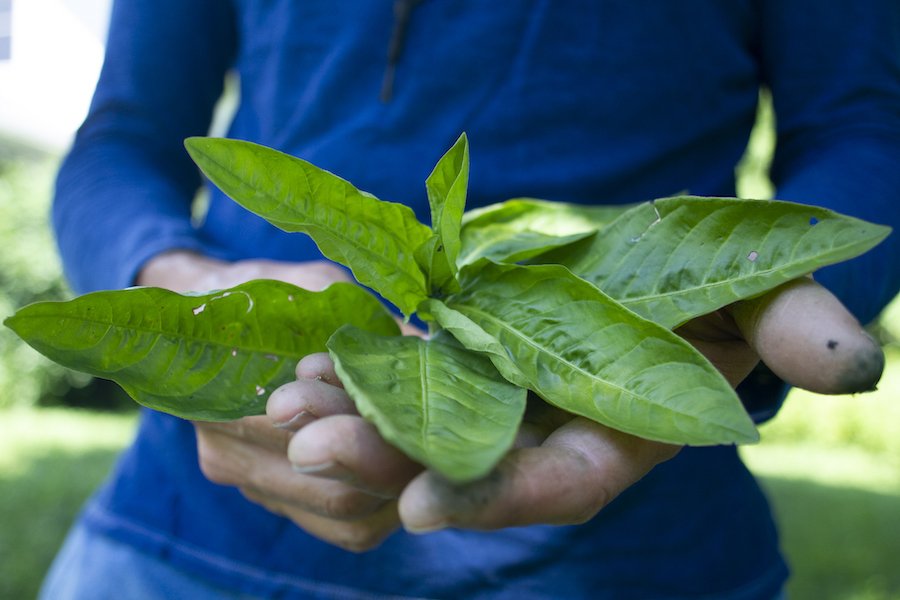 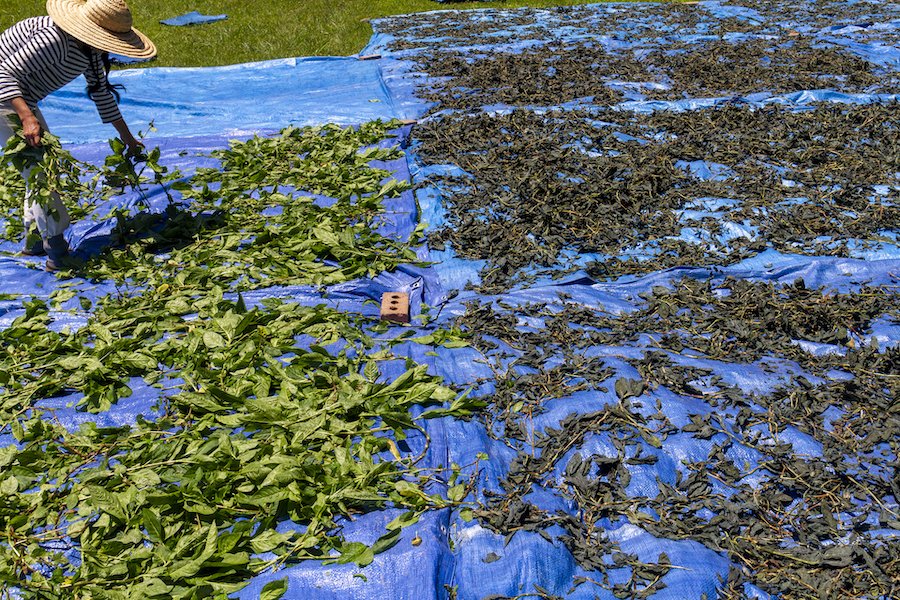 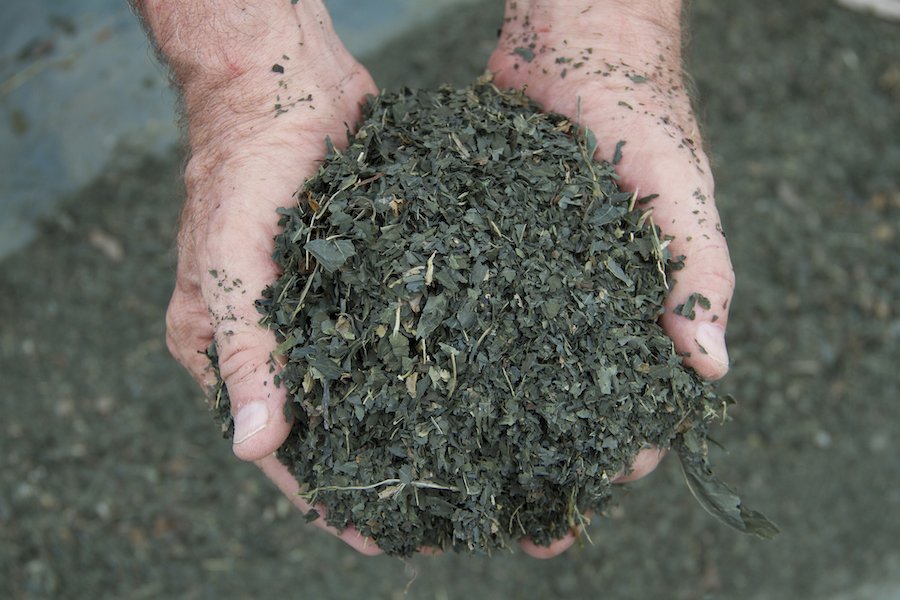 And this is perhaps the most important and intentional part of teaching, he notes: “It’s not just about you and your stuff. You’re supported by people who came before and people who came after. This desire that we have for immediate gratification through massive consumption, the model doesn’t support that. The greater challenges that we face globally, this is at the root of our problem: the level that we assume we should be consuming.”

“I’m interested in human scale, and what that means. After slave emancipation in the US, there was the promise of ‘40 acres and a mule,’ although it was never delivered on. Right about the same time in Japan, land reforms redistributed land from wealthy landowners to the people who had been working the land. And they determined that for a family of five, you needed almost five tan of land, about an acre and a quarter, to feed yourself. So those ideas of scale, what you need, are really quite different: 40 acres versus an acre and a quarter.” 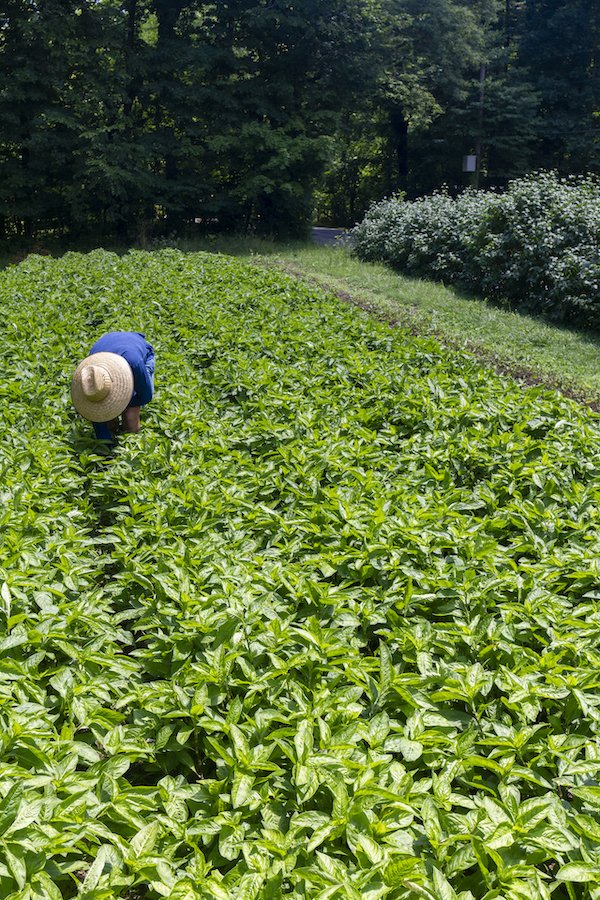 “We have a small bit of land. In our process, the only thing that leaves our property is the color itself. Everything else gets captured and put back on the field, even rainwater from the roof. The reality is if we were growing and producing more, the land here wouldn’t be able to sustain it. There’s nothing toxic or dangerous. It’s composted plant material, but there’s only so much of that you can do.”

“It’s important to me that it’s our own land. We’re the stewards. Ownership creates a sense of responsibility in me that is so much less abstract. I have all kinds of questions about, can you own land? Your property rights mean nothing to a tornado or a sinkhole. When you look at the history of our nation, it was founded on land expropriation. Indiana is a great example. People showed up with land grants from the Revolutionary War and took over the land with a piece of paper.”

Recently, the Ricketts used scraps from their studios to make masks to benefit IU’s Student Emergency Assistance Fund. “We made 70 masks, and we sold them in less than 30 minutes. So we found a bolt of Chinami’s from fifteen years ago and made more. They sold in 15 minutes.”  In projects like masks, the Ricketts waste as little cloth as possible. Chinami’s cloth is all handwoven, and Rowland’s is from Japanese studios. To cut it and throw out parts of it, the Ricketts felt, seemed disrespectful. Their masks use a Japanese pattern that only requires cutting tiny triangles off the corners of rectangles. 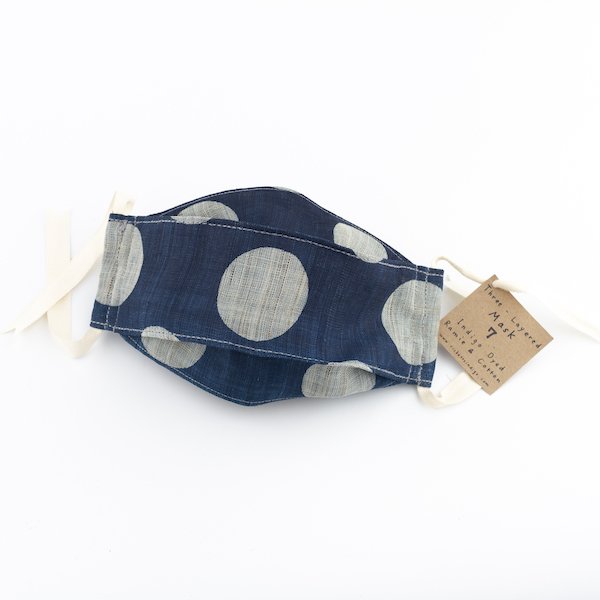 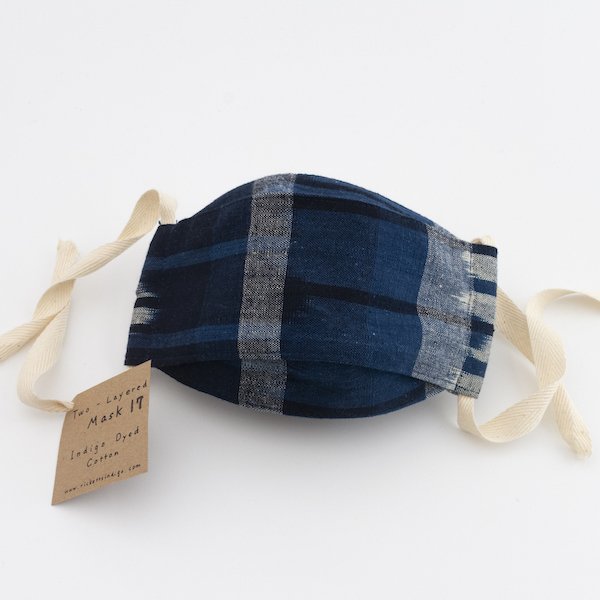 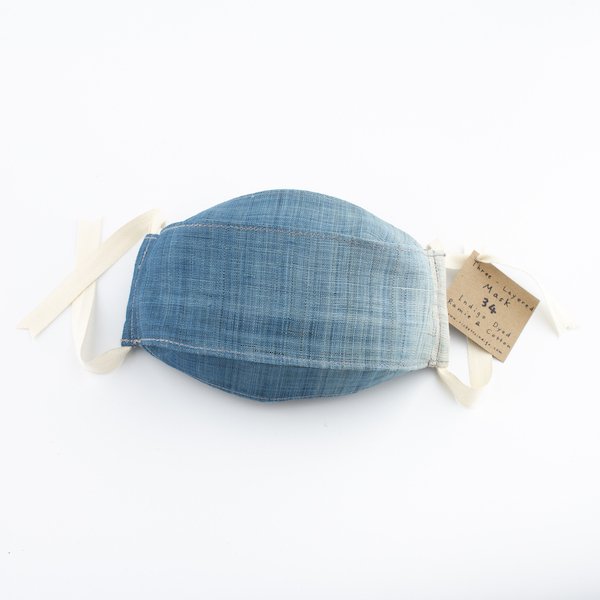 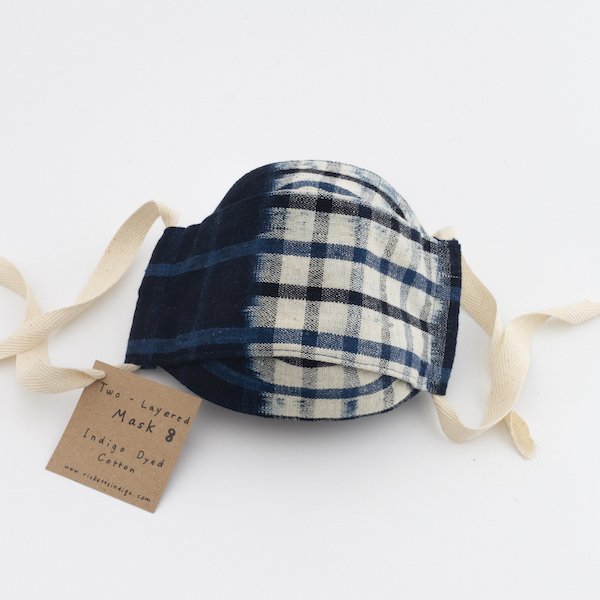 Now that their three children are older, Chinami is exploring where to take her weaving next, including in some collaborations with Rowland on bolts of cloth. Her very specialized technique competes in a much larger market of textiles, some machine woven, some handwoven in ways that exploit global inequities. There are faster, cheaper ways to make fabric. But Chinami’s work and its relationship to time and the human hand provide a different perspective, a different kind of value.

Rowland’s current work, on fading, also suggests a new perspective on time and human experience. “In the world of textile conservation and art conservation, fading is considered bad. You don’t want things to fade. You don’t display pieces that have faded. But I just started embracing it.” Rowland’s installation Ai no Keshiki is at the Renwick Gallery at the Smithsonian Museum. For this project, 450 people around the world lived with a piece of indigo cloth as part of their regular lives, letting it fade, and then returned it to become part of an art installation testifying to a diversity of experience.