Crossposted from the Herald-Times, this is The Mill’s regular column, written by Pat East, Executive Director.

One of our newest programs at The Mill is the IU Faculty and Staff Accelerator, a collaboration with IU’s Innovation and Commercialization Office (ICO). Thank you to Andy Lehman, Head of Accelerator Programming at The Mill, and Simran Trana, Associate VP of Innovation and Commercialization at IU, for forming the partnership. It’s exclusively for IU faculty and staff who are launching a startup—or already have—and want help refining their idea and validating their market. 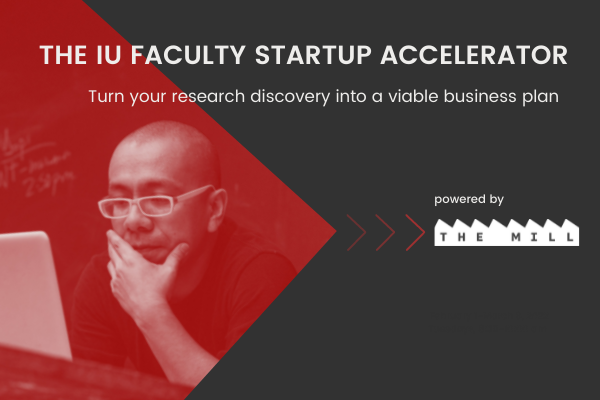 We kicked off this program on February 1 with six companies and seven participants.

RealCV is using artificial intelligence to build a smart “skill translation” service for people looking to make a career switch or re-enter the workforce. Their initial market will be people working in higher ed who want to switch careers. So, a professor could enter “I taught three classes per semester” into RealCV. The AI would translate that to marketable skills like strategic planning, project management, strong communicator, empathetic mentor. Once RealCV validates their product, they see additional market opportunities outside academia.

OmTherapeutics is creating an RNA gene therapy for pancreatic fibrosis. With the development of the COVID vaccines, applications for RNA are starting to become more viable. Specifically, this RNA gene therapy targets all the areas to help fight pancreatic fibrosis. Competing therapies target only one area. If a dam has 20 holes and is leaking water, current technology only allows you to plug one hole. But with OmTherapeutics, you can plug all 20 and fix the underlying structural issues at the same time.

Psirena has developed a process to streamline and identify a key ingredient in mRNA therapeutics (think the COVID vaccine). Little is known about this particular ingredient (5-methyl Psi), and it’s incredibly hard to detect. It’s like looking for a single grain of sugar in a chocolate chip cookie. You know it’s there, but it’s hard to pinpoint exactly where it is and what it’s doing (aside from making the cookie delicious). Psirena’s process optimizes and streamlines RNA sequencing to locate Psi. It also generates highly reproducible results. That will allow for better and more advanced mRNA therapeutics, saving pharmaceutical companies money as they develop new and more sophisticated drugs.

Kardyon has developed a way to deliver a peptide drug to help fight heart failure. In current trials, they’re delivering the drug through the lungs. Models suggest it’s providing a significant therapeutic benefit. This could be a way to more effectively treat heart failure, which is responsible for one in six deaths.

SkyDOS aims to be the solution for last-mile delivery via drones. Essentially, SkyDOS will use current roadways to build “roads” in the sky for drone delivery. So, instead of a sky full of drones darting every which way, they would follow the same roadways as cars, busses, and trucks do now to safely deliver your Amazon order.

For featured cellists, a riser on the performance stage is an industry standard. It’s supposed to help them stand out and project their instrument, but instead it weakens the performance. Celadore is an acoustically optimized riser that enhances, rather than detracts, from the featured performer.

IU faculty and staff are doing state-of-the-art research and developing amazing innovations—but we need make sure they can make money. So in our new pre-accelerator program, they spent the first three weeks working on customer development, defining the problem they’re solving, and understanding the market opportunity. The last three weeks focused on marketing, sales, building a team, refining their business plan, and building their pitch deck.

In addition, participants met with The Mill’s network of mentors and investors:

On March 8, we hosted a Demo Night for the participants to pitch entrepreneurs, founders, investors and community leaders. Thank you to Hanping Guan, the Senior Technology Commercialization Manager at ICO, for emceeing the event. Cy and Jason Whitney from IU Ventures also gave feedback on the final presentations.

Key Insights From the Pilot

One key insight we gleaned from the process, thanks to Elise Young, was to show connections between the academic world and the startup world. Elise discussed creating an MVP, a simple version of the product that allows startups to test it and make iterative changes based on what they learn. In doing so, she made an analogy to the scientific method. Many of our faculty innovators work in life sciences. For them, connecting this new idea to the scientific method they already know created an aha moment.

Another key insight was that while faculty may have a desire to start a startup, they don’t necessarily want to run it. They enjoy research and teaching, and while that knowledge provides the foundation for the company, most faculty want to limit their operational role. That creates an opportunity for partnering with Kelley to help faculty find CEOs. An MBA could, for example, spend 30 days “trying on” a startup. If they like it, they keep working on it. If they don’t, they move onto the next one with no hard feelings. It’s not “I don’t like your idea,” it’s “I’m not a good fit for this idea.” Notre Dame has done this and created a culture we can model.

Simran and Hanping have been great partners. Andy debriefed with them and identified five additional improvements for the next cohort.

1. Faculty and staff have a lot of responsibilities.

They’re pulled into meetings, reviews, and interviews that conflicted with our meeting times even during sabbatical. In fact, while we had a great turnout, only IU faculty and staff who were on sabbatical—a sliver of total faculty—applied to the program. We’re looking at how we might reduce some of the many touchpoints in the pre-accelerator and still bring the same value to participants. One of those might be holding it in the summer. That would free up more time for more folks, but would also prevent us from holding it multiple times per year. As more folks learn about the program and can plan ahead, we expect demand to increase.

2. There are no career incentives at IU for faculty to create a startup.

The common sentiment is, “Personally, I want to create a startup. But professionally, I benefit more from using that time to publish or write, to support getting tenure.” ICO understands this is a barrier. They don’t want faculty and staff to have to push so hard to show their startup is valuable to the university and their department. One of my Wabash classmates worked in tech transfer for both IU and Purdue. There may be some good learnings and perspective to better understand how to support IU and ICO and how The Mill might be able to fill in gaps as a third-party organization.

3. We created a safe space for faculty and staff to explore starting a startup.

The participants are smart folks, but startups are a brand-new endeavor for them, and they don’t know what they don’t know. We brought value by bringing a perspective outside of IU. We created connections within this startup ecosystem that weren’t related to higher ed. In addition, we provided psychological safety for them to learn in a supportive environment and gave them space to figure out whether their idea is viable.

4. Participants gained an understanding of how important selling a story and a startup’s vision are.

They’re used to presenting on topics in a classroom setting, where they’re the experts. Pitching your startup is a different skill. It requires you to deal in unknowns instead of absolutes. This shift in mindset was a pretty key insight for us during the program.

I alluded to it earlier, but the fifth key learning was that we packed in a lot of information into six weeks. We need to adjust expectations on how much to include going forward. Perhaps this pre-accelerator is the first step that leads to additional steps and opportunities down the road.

So this first step, the pre-accelerator, focuses on what it’s like running a startup, thinking about customer development and making the mission of the startup more accessible to those customers. The second step could focus on finances and funding, both from investors and grants like SBIRs/STTRs (“What capital will you need to make this startup a success?”). The third step could be recruiting a CEO from Kelley, as described earlier. Essentially, the first two steps would prepare the founder for the third step and provide enough tools to transition to new, full-time leadership.

We’re excited that the pilot pre-accelerator—our own MVP, if you will—validated this new program and produced actionable insights to make our next cohort even better. If you’re faculty or staff at IU and interested in participating in this program, please email Andy Lehman, our Head of Accelerator Programming, at [email protected].